Most people know Judge Merrick Garland for what didn’t happen to him. Five years ago, the Senate never acted on his nomination to the Supreme Court.

This week, that will change, as a new chapter begins in Garland’s lifelong commitment to public service. Garland, 68, will appear before the Senate Judiciary Committee on Monday as President Biden’s pick to serve as attorney general. This time, few obstacles stand in his path to confirmation. But the institution he’s likely to join operates largely in a state of shock.

The Justice Department is still reeling from political scandals from the Trump years — and racing to neutralize the threat from homegrown, violent extremists who participated in the attack on the U.S. Capitol. Over a legal career that spans 44 years, Garland has confronted those kinds of problems before. It’s one of the many reasons the White House selected him to serve as the nation’s top law enforcement officer.

“Having a well-respected judge as attorney general will help get the department out of the quagmire of partisan politics that many people think it devolved to under President Trump and Attorney General [William] Barr,” said Georgetown University law professor Paul Butler.

After clerking for Justice William Brennan on the Supreme Court, Garland took a job as an adviser in President Jimmy Carter’s Justice Department. In those years after the Watergate scandal, department leaders struggled to separate partisan influence from law enforcement and establish new boundaries for the FBI. Some of the biggest investigations of that era, in which Garland played a bit part, later found their way onto movie screens.

“American Hustle, about the Abscam case; Argo, about the exfiltration of hostages in Iran; and most important, the Miracle on Ice, which was about the Lake Placid Olympics, where I did work on the security for the Olympics,” Garland recalled to an audience at his alma mater, Harvard Law School, in 2016.

Garland told former Harvard Law School Dean Martha Minow he didn’t start out with his mindset on the law. Rather, he wanted to help people one on one, so he planned to become a doctor. But his collision with chemistry and math spun him toward the legal profession, where he has searched to build that sort of direct connection ever since.

In the mid-1980s, Garland became a rising star at the Arnold & Porter law firm in Washington, D.C. Unusual among his peers, he made time for a young college graduate, Randy Thompson, who worked in the firm’s copy center. Thompson said Garland reviewed one of his papers, photocopied it and rearranged the paragraphs.

“That was the beginning of, in essence, him becoming a writing coach for me, and it was just extraordinary experience, and he became my coach, eventually my mentor and, 30-something years later, a friend,” Thompson said.

Eventually, Garland wrote him a reference for law school, attended his graduation and has kept in touch ever since. Thompson said Garland is still a little old-school, still humble and still looking to help.

“The only thing that really has changed about him, and I guess me as well, is the color of our hair,” he said with a laugh. 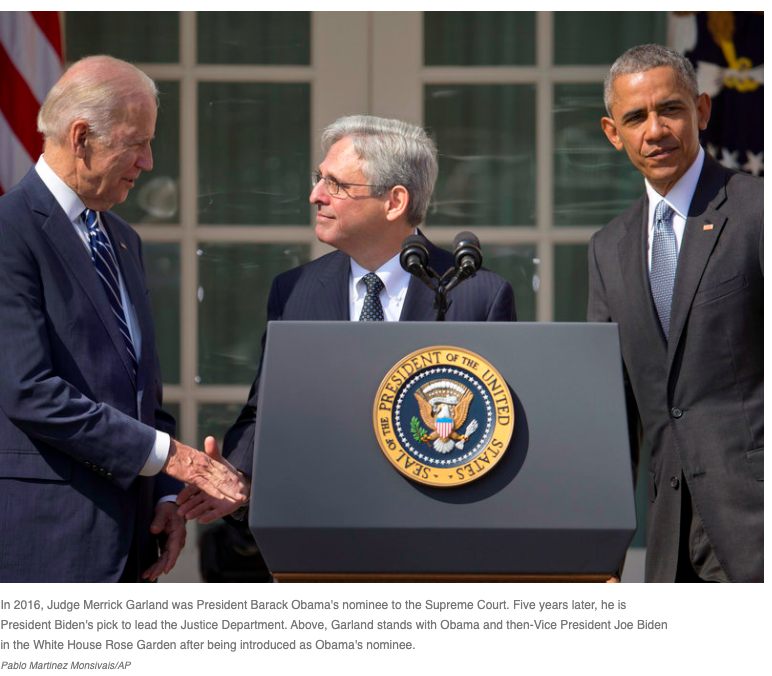 A return to government

Garland spent several years at the firm, before a judge advised him that he was “wasting his life” and should rejoin the government instead, as Garland put it in his Harvard remarks. He took that advice, and by the early 1990s, Garland was prosecuting a violent gang that terrorized people in a public housing project and was helping to advance a case against D.C.’s then-mayor, Marion Barry, on drug charges.

Back inside the Justice Department headquarters, Garland became the man to see for the hardest problems. On April 19, 1995, a truck bomb tore apart the federal building in Oklahoma City, killing 168 people. Former Deputy Attorney General Jamie Gorelick remembers watching that day, with Garland at her side.

“He basically said, while watching children being pulled out of the wreckage, that he had to go,” Gorelick said. “He really wanted to go. We both had young children at the time, and what we saw on those screens was so affecting.”

Garland would soon travel to the site of the deadliest domestic terrorism attack in American history. He oversaw the search warrants, protected the chain of evidence and insisted that reporters have access to court proceedings.

“We wanted somebody who could make sure that the investigation was done by the book and that any indictment was bulletproof,” Gorelick said.

EPRN partners with ICCE, the global professional body for economists

Get latest insights and analysis covering major topics directly into your email. Subscribe to our newsletter now.